Moist and tender gluten free cinnamon roll cupcakes have all the flavor of the best cinnamon roll, made quick and easy in a muffin tin.

The flavor that unites us

You know how some people are chocolate people, and others are vanilla people? Well, almost everyone is a cinnamon-sugar person (I’m sure some of you hate the stuff, but I’ve yet to hear about it—and readers aren’t usually shy about sharing what they don’t like!).

We have plenty of recipes for cinnamon rolls here on the blog, but there is rolling and shaping involved in every single one of them. These gluten free cinnamon roll cupcakes are for those times when you just can’t be bothered to roll and shape!

The tops have a lightly crunchy cinnamon-sugar crust, and the cake is tender and buttery and not-too-sweet. Inside, there’s a perfect cinnamon-sugar swirl. But I promise it’s simple to do.

How do you make the cinnamon swirl?

The cinnamon swirl is a simple mixture of melted shortening or coconut oil, brown sugar, and cinnamon. Rather than mixing it into the cupcake batter, where it would change the consistency of the cakes, we place half of it in the center and half on top.

We begin by filling the muffin tins halfway full with the plain batter. That creates a solid base for baking. Then, we add half the cinnamon-sugar filling mixture, and swirl it around a bit to make sure it doesn’t just leak out during baking.

On top, we add the remaining plain cupcake batter, and the final swirl mixture. It takes just a few moments, and it’s the reason we’re not rolling and shaping cinnamon roll dough.

Of course, if you’d prefer an actual cinnamon roll, I’d begin with our yeast free gluten free cinnamon roll recipe. It’s the next easiest thing to these cupcakes. 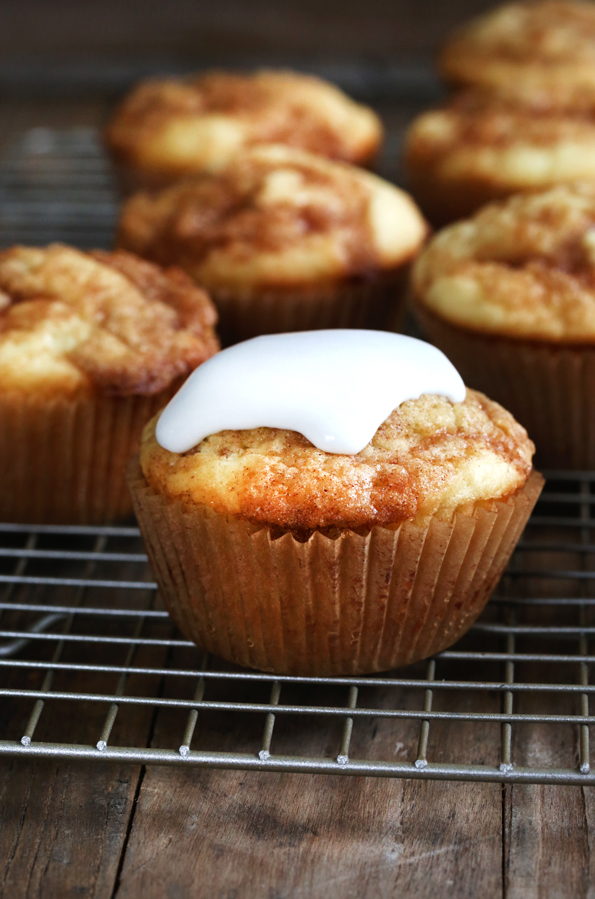 What are the options for the glaze?

Since the cinnamon sugar on top creates a very light and crispy glaze, these cupcakes can be served plain. Since plain here isn’t really plain at all, and if you’re storing them for later use, you’ll want to leave them unglazed (see further discussion below).

If you’d like a more spreadable, richer glaze, you can add butter and cinnamon to the confectioners’ sugar. Add water by the drop to create a paste with the consistency of frosting.

If you’d like to serve this glaze on top of the cupcakes, try spooning it over them while they’re still a bit warm from the oven. Otherwise, slice the cupcakes in half and spoon the glaze on each half. 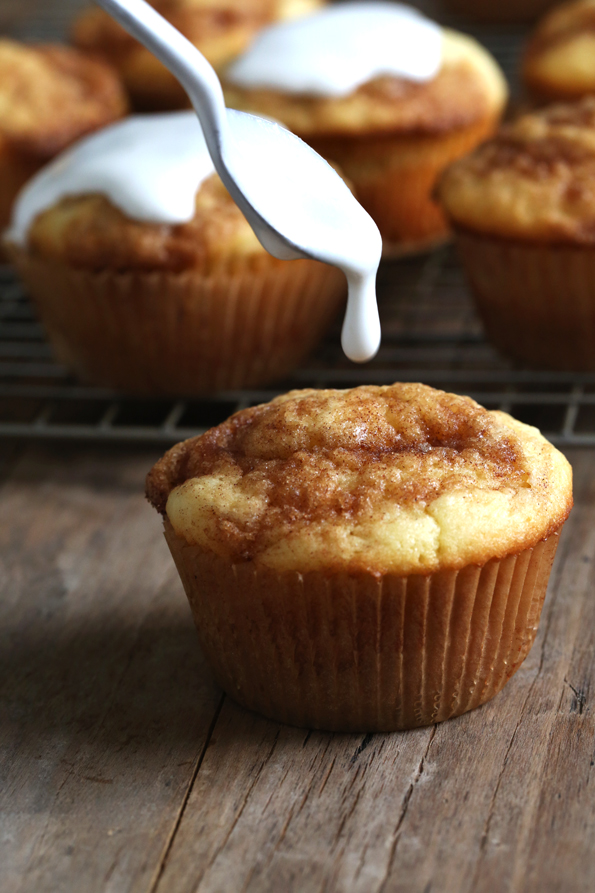 Can you store the cupcakes after baking?

These gluten free cinnamon roll cupcakes are so moist and tender, and the cinnamon is so fragrant, that you’ll have to enjoy at least one right away. But if you don’t plan to serve them all right away, they’re easily stored for another time. Simply glaze only the cupcakes you plan to serve right away.

If you don’t plan to serve them all right away, freeze them unglazed. Wait until all of the baked cupcakes are completely cool, then freeze them in a single layer.

When you’re ready to serve them, just allow them to defrost at room temperature or even in the microwave for a few seconds. You can even refresh them in a toaster oven at about 300°F to crisp that cinnamon sugar on top. Then, make the glaze fresh and serve.

There is dairy in these cupcakes in the forms of butter and buttermilk. The butter in the muffin batter can be replaced with your favorite vegan butter replacement. My favorites are Melt brand and Miyoko’s Kitchen brand vegan butter.

In place of buttermilk, use half non-dairy plain yogurt (I like So Delicious brand) and half unsweetened nondairy milk (my favorite is unsweetened almond milk). This substitute also works with dairy yogurt and milk, if you can have dairy but you’ve run out of buttermilk.

There are 3 whole eggs in this recipe. For that reason, I don’t believe that my usual suggestion of a “chia egg” for each egg would work. For reference, a “chia egg” is one tablespoon ground white chia seeds mixed with one tablespoon lukewarm water, mixed and allowed to gel.

If you are willing to create a boiled flax egg (by boiling ground flax seeds with water until a viscous liquid is produced, then straining out the seeds), that might work.

The vegetable shortening in the swirl/filling can easily be replaced with virgin coconut oil. I don’t recommend using butter, which solidifies too quickly and will make it more difficult to swirl into the cupcake batter. 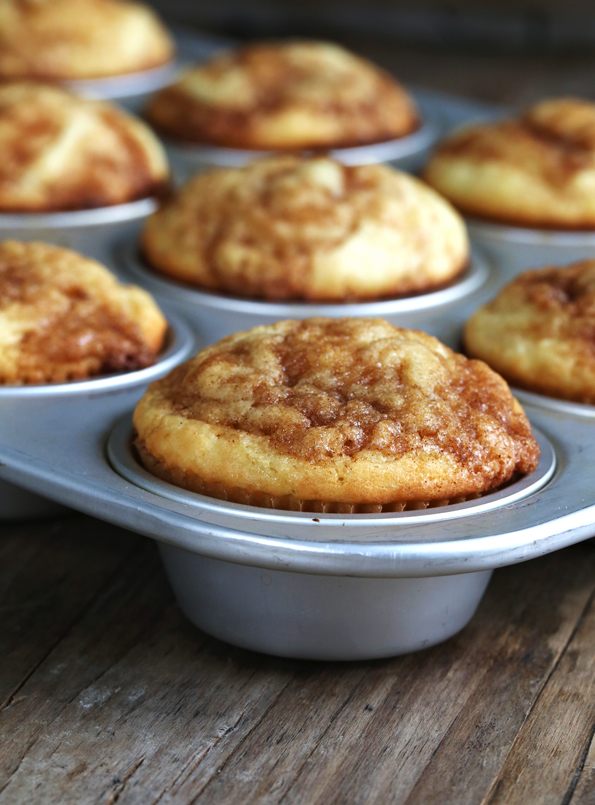