Banana bonanza (too much?)

My one bowl gluten free banana bread recipe is easily one of my favorite recipes in the history of ever. Whenever we talk about it on Facebook, so many of you say (sometimes as a sort of confession, but there’s no shame needed here!) that you make that banana bread once a week—at least!

But about a year ago, I finally got a little hook that sticks on to the underside of a kitchen cabinet to hold bananas, so they don’t ripen unevenly. It even folds up and out of sight when it’s not in use.

I don’t care for those enormous “banana trees.” I can’t dedicate that sort of counter real estate to one fruit. But this hook is awesome. And my ripening bananas are always front and center!

Banana bread variety is the spice of life

Many of you have said that you add chocolate chips to your banana bread. Well, of course that’s genius. Chocolate and bananas are a match made in heaven, and I’m only ashamed that I never thought to try that myself.

Another match made in heaven is cinnamon-sugar and bananas. The cinnamon swirl flavors every bite, but of course is concentrated on the top and toward the center, as that’s where we put the swirl mixture.

Every single crumb of the banana bread itself is fork-squish tender (that’s a thing, right?), but the swirl itself is just on another level entirely. But somehow it doesn’t make the slices delicate or prone to falling apart.

There are so many textures in this banana bread, which come together to make it feel extra special: the soft and springy cake texture with a super moist crumb, with the crispy, crunchy top. “Regular” banana bread really just can’t compare.

There aren’t any fancy tools needed to make this bread. You’ll need to gather just the basics, including:

Bananas that are good for baking are almost a completely different fruit to the onese that are right for baking. As a banana ripens fully, the starches in the fruit turn to sugar and the inside sweetens. (Science source.)

Store very ripened bananas in the freezer for later baking

The peel of a ripening banana eventually turns spotty and ultimately blackened, and the fruit inside becomes softer and softer. If you store your bananas on a hook or banana tree, once they’ve become quite ripe the peel begins to break down and they’ll fall off the hook.

Remove them from the hook before that happens and lay them flat to finish ripening, then peel and freeze the fruit inside if you’re not ready to bake with it right away. Seal it tightly in a freezer-safe container so it doesn’t get freezer burn, and other foods in your freezer don’t begin to smell like bananas!

How to make that cinnamon swirl

When adding a cinnamon swirl, I’ve found that virgin coconut oil works better than butter. Whenever you’re swirling batter with a cinnamon-sugar mixture, the enemy is a too-stiff batter that doesn’t want to, well, swirl. Melted virgin coconut oil is thinner than melted butter, and suddenly the entire recipe becomes easier to handle.

When you add melted coconut oil to the cinnamon sugar swirl, too, it tends to stay in place rather than melting throughout the batter like it would if we were using butter. A crumble, which has flour in it, is quite different from a swirl as a crumble has its own structure.

I’ll leave it there since we’re getting into the ingredient-and-recipe-development weeds, and I’m fairly certain I’m the only one still interested. Just trust me that you want to use melted coconut oil in this recipe where it’s called for, even if you’re not dairy free!

Since the crumb of this banana bread is so moist and tender, the bread is quite fragile before it’s cool. If you attempt to slice the loaf before it’s completely cool, it will collapse under the knife. Let it cool in the pan for about 10 minutes, then carefully transfer it to a wire rack to finish cooling, then slice it thickly and serve.

Leftovers can be wrapped very tightly and stored at room temperature for up to 3 days, and frozen for longer storage. I prefer to slice any leftover bread and wrap the slices so it can be defrosted and enjoyed by the slice. If you prefer to freeze it whole, wrap it tightly and place it on a flat surface like a quarter baking sheet in the freezer until it’s fully frozen, then defrost it fully before slicing and serving.

Be sure to layer the batter with the swirl

Resist the urge to dump the whole swirl mixture in between the layers of banana bread. There’s too much of it, and it will cause the banana bread layers to separate from one another during and after baking, making the bread unstable.

This recipe is already dairy-free, and I really recommend that you use the virgin coconut oil and not substitute it with butter. It helps keep the batter the proper consistency for swirling, and butter has more moisture which can cause the bread to sink as it cools.

If you don’t have a problem with dairy, you can replace the plain yogurt with an equal amount, by weight, of sour cream or regular dairy-containing Greek-style yogurt. Don’t attempt to replace the yogurt with anything thinner, like buttermilk or milk.

Since this recipe calls for 2 eggs, you should be able to replace each of them with a “chia egg,” which is just 1 tablespoon ground chia seeds mixed with 1 tablespoon lukewarm water and allowed to gel. I haven’t tried that substitution, though, so you’ll have to experiment.

Even though I believe that coconut oil is the very best fat to use in this recipe, you may not be able to use it. If you don’t care for the coconut flavor in coconut oil, try “triple-filtered” coconut oil, which has absolutely not coconut aroma. My local Trader Joe’s has it.

Just kidding! We’re not making banana bread banana-free, silly! If you don’t like or can’t have bananas, try one of the many other gluten free quick bread recipes here on the blog.

Is there gluten in bananas?

No! Bananas, like all plain fruits, are safely gluten free.

Do you put cinnamon in banana bread?

I sometimes add a pinch (1/8 teaspoon) of ground cinnamon in our classic gluten free banana bread, but this recipe is really a true banana bread with cinnamon. It’s cinnamon forward!

How ripe should the bananas be for this banana cinnamon bread recipe?

They say that there are no “too ripe” banans when it comes to baking with bananas. You don’t need to wait until the peels are blackened, though, before baking with them. They should at least be quite spotty, and most importantly, fragrant. Generally, baking bananas are not the ones you want to peel and eat!

Can I add nuts to this banana bread recipe to make cinnamon banana nut bread?

Yes! You can add up to 2 ounces of soft, raw, and finely chopped nuts the cinnamon swirl mixture (pecans or walnuts would work well). Avoid adding more nuts than that to the swirl or the banana bread layers will separate from one another in the oven and make the bread unstable.

How do you keep gluten free cinnamon banana bread moist?

I typically avoid refrigerating any baked goods, since the refrigerator tends to be drying. After this bread has cooled completely, you can store it, covered, at room temperature for up to 2 days. For longer storage, wrap the slices tightly and freeze them.

Why did my gf banana bread sink after baking?

A too-hot oven or baking in glass or a dark colored pan will cause baked goods to rise rapidly and overbake on the outside before the center is fully baked. A raw center can’t support the weight of the bread as it cools, so your baked goods will sink.

If you undermeasured your all purpose gluten free flour, overmeasured your wet ingredients, and/or didn’t divide the swirl mixture into multiple layers and then swirl, your bread will be too wet, and will sink as it cools. 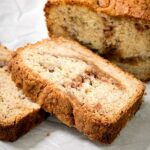 Make and add the swirl.

Originally published on the blog in 2018; in 2022, recipe clarified a bit, text resources added.